I don't know what's worse - Kemal leaving or Orlaith staying. Either would be pretty hard to take on a Friday night, but getting both together is enough to make you reach for the Mongolian Coconut Cake.

How the British public can evict a fabulous diva in preference to "a skanky bitch" (Kemal's words, not mine), I've no idea. Kemal may not have been everyone's cup of tea, but he did admit to having gay sex in a skip, which could be a first for Big Brother. In the words of Derek, "there's more mince in that walk than there is in the freezer". And like the mince, Science wouldn't go near him unless he'd been thoroughly washed.

But personally I liked Kemal. It's not every day you meet a mole-obsessive who calls everyone Baby Doll and talks to gnomes in a sari. As he said himself, "I may wear stilettos, but I still have balls". Which he duly proved by walking around the house in a thong. 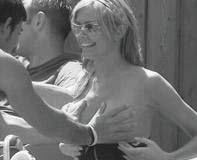 Orlaith meanwhile continued her constant wailing about her overwhelming desire to leave. Something of course we knew she'd never do...

... until she did, yesterday morning. To be honest, the producers (as well as any right-thinking members of the British public) must have been glad she walked, as it saves them the frankly impossible task of compiling a 60 second montage of her best bits. There's only so much nipple-tweaking you can take.

Orlaith did however surpass herself in the brief interview she gave to Dermot O'Leary on 'Big Brother's Little Brother' today. Not content with announcing that she knew she would stay over Kemal, and that she just wanted to wait for his eviction before leaving, she went on to brand Eugene as some kind of evil genius, and hold him solely responsible for all the unrest in the house. Which, to anyone who's watched Eugene constantly sitting in the corner looking like a scared rabbit in the headlights of a juggernaut, sounds a tad on the barking side.

The good news, however, is that a new contestant is set to enter the house tonight. There may only be two weeks of the show left, but people of Britain, it's not too late. We can hope for only one thing: